How are you this evening?

All today I have had a craving for chips.  Not homemade oven chips but honest to goodness chipper chips.  So in order to banish the thoughts I had the usual prom walk but then instead of the cuppa and a biscuit I put on a walking video.  I made sure to have plenty of chopped fruit and veg for those snacks which for some reason seem to be still in the fridge.  It didn’t help.  I found myself just an hour ago crossing over the threshold of the chipper.

The aroma was wonderful: that heady mixture of salt, vinegar and spices.  My mouth was salivating.  A few minutes reading that enticing menu but all along I knew when my time came I would say “Onion rings and chips please” My shoulders relaxed, the pain my neck eased.  And now, for the next part of a trip to the chipper the act of people watching.

I love people watching and there was so much to see and hear.  The majority of the customers were known by name.  Was I envious? Definitely.  To be part of a community is a necessity.  Did the people here realise that they were part of a community and that others would be envious of them? Maybe or maybe not.  Did it really matter?

Every age group was represented here.  “Redser” a small ten-year-old had a list as long as your arm memorised.  It seems it was different to his normal order and Joe who owned the chipper was quick to check just in case.  “Me bleedin cousins are here” Redser told us all.

Two young men came in having rung in their order as they were on their way to watch the match. Kitted out in the Irish Jerseys and scarves, they told Joe Ireland was going to win by the single goal.  “Darren Randolph will have a clean sheet”.  I hadn’t even realised that Ireland were playing.  I’d better remember to check out the score later or perhaps catch up on the I player.  They all dissected the team and the opposition and  all the while Joe took orders as new customers came in.

At the same time, there was an ongoing conversation being had by 4 teenagers “We need bulking out if we want to make any sort of an impression.” Ah obviously, they wanted to impress some girls I thought.  “How are we ever going to get onto the senior cup team”? Ah well I was way off the mark there.  They continued talking about buying protein supplements and extra training sessions.  Then the image was spoiled when the order of “2 quaterpounders and chips” for each of them was called together with the diet coke. Just priceless to listen to the serious discussion on nutrition and for the image to be shattered by the reality of the order “2 quaterpounders and chips” for each of them together with the diet coke. It was hard not to laugh.

Before I knew it my order was ready and all my thoughts were on getting home as fast as possible and curling up to watch Margaret Rutherford as Miss Marple and slowly enjoying every last one these delicious golden nuggets. 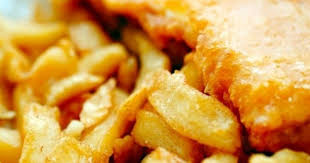 Definitely a little piece of heaven……

A little explanation for those not from or living in Ireland.  A chipper is a shop where potatoes are cut into chips, deep fried and sold wrapped in paper.  Deep fried fish, burgers and onions are also sold.

2 thoughts on “A Community?”